Five of the Best New Releases

Whether you're a MegaWays maniac, old-school gambler yearning for some classic slot action, or a volatility vulture on the hunt for a monster payday, you're sure to find something that whets your appetite at Wildz Casino.

We've taken the time to compile five of the hottest releases landing on our digital doorstep... 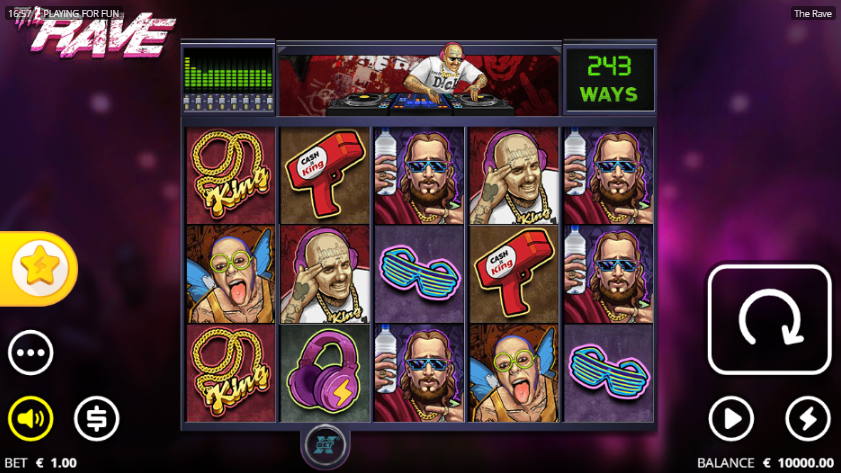 Dust off your dancing shoes, dig out the glowsticks, and get down to The Rave.

Spinning the discs over a 5x3 reel setup is none other than P5ychØ Manhunt - he of San Quentin fame. Your disc jokey for the evening appears to have served his time inside and swapped the jailcell for the DJ booth, creating a wildly hedonistic atmosphere that could easily swap for a Prodigy concert.

The game, not unsurprisingly, is pre-faced with a warning. Those of a photosensitive disposition - beware!

With a max payout worth 41,500x the bet, lose yourself in this chaotic, strobe-drenched affair for a Rave like no other! 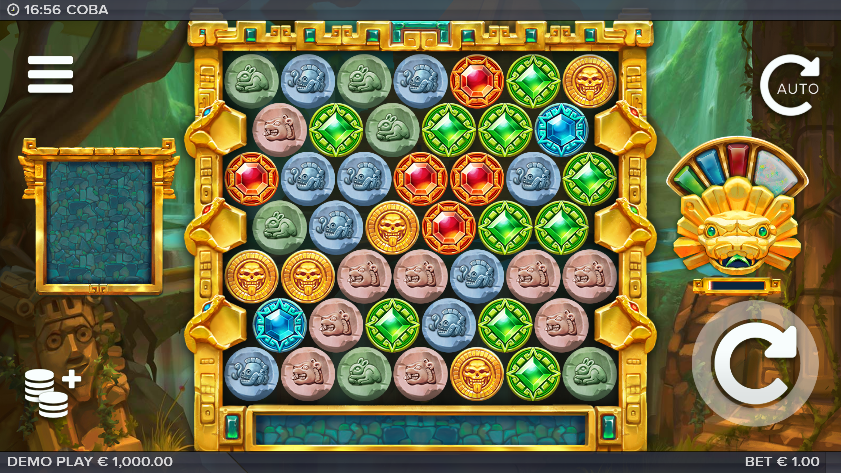 Slithering its way into the next entry is Coba.

The creation of talented outfit ELK Studios, this slot offers a twist on classic 'Snake' gameplay that delivered hours of endless fun for mobile users everywhere in the early naughties.

It is said that Quetzalcoatl, the legendary snakelike Mayan god, guards treasures worth up to 25,000x from those able to negotiate its chamber's perilous traps.

Make use of tumbling reels, multiplying wilds, and a Snake Meter that unleashes up to 6 snakes onto the 7x7 grid at any one time.

Watch as serpents chow down on identically coloured symbols for even bigger cluster wins in this uniquely exotic slot adventure. 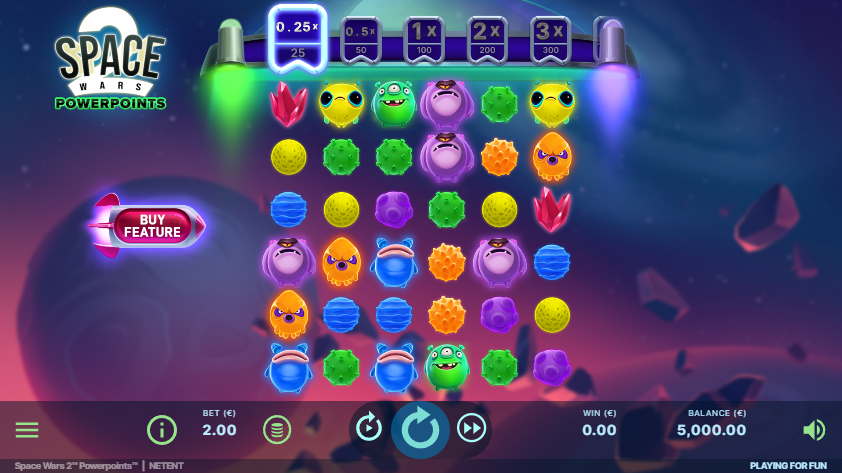 The mere mention of 'Powerpoints' is enough to send shivers down the spine of many an office worker. Don't be put off by its use here. The latest NetEnt-powered creation has nothing to do with work presentations or tiresome Quarterly business meetings held in stuffy boardrooms.

Instead, Space Wars 2 Powerpoints invites players to blast off on an intergalatic odyssey across a 6x6 matrix for an altogether more enjoyable, potentially lucrative time.

This brightly coloured sequel offers a wealth of bonus extras, too.

In addition to Avalanches, a Powerpoints meter advancing players through levels and copious Wild/Multipliers, there's a Column/Row Blaster, symbol-removing Zapper, and Combos feature which is effectively a combination of the above.

Still not persuaded to don your space shoes? How about a top payout equal to 10,020x the wager?

NetEnt is no stranger to games set in outer space, of course. Case in point being Starburst - the provider's surprising global smash hit regularly enjoyed by slot fans of all ages.

Space Wars 2 Powerpoints is a far more charming release than its decade-old counterpart, packing in a bunch of personality plus a ton of features to boot. 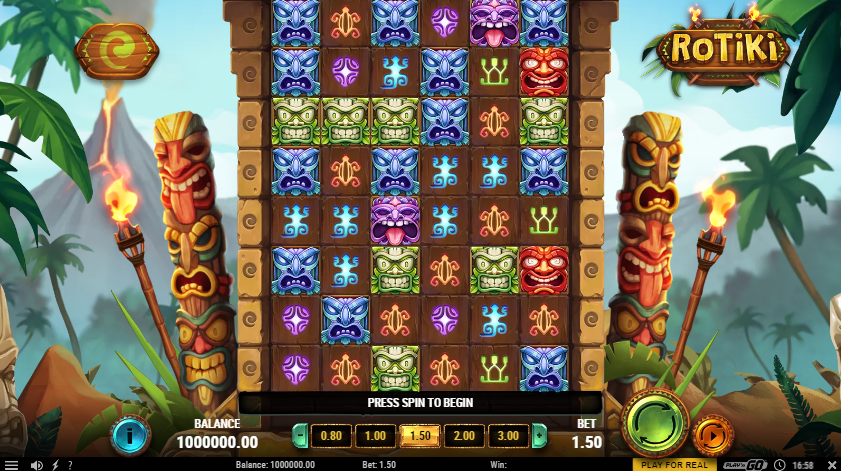 It wouldn't be a rundown of new releases without an inclusion from one of the veterans of the game.

The penultimate entry in our compilation, celebrated Swedish developer Play'n GO are represented by Rotiki - an intriguing game offering an unusual spin on regular grid play.

This slot sees players attempt to navigate vast rainforests tasked with locating the burial grounds of an ancient tribe leader lured by the promise of untold riches.

Symbols land a little differently in Rotiki. Instead of dropping in from above, they swoop in in a right-to-left direction with each block effectively performing a rotation.

Every cluster of 5 symbols or more triggers 3 re-spins, with the ultimate aim of clearing the entire 6x8 grid of symbols to make way for Free Spins.

If you're hunting for a unique Polynesian adventure spiced up by unorthdox gameplay, Rotiki is just the ticket. 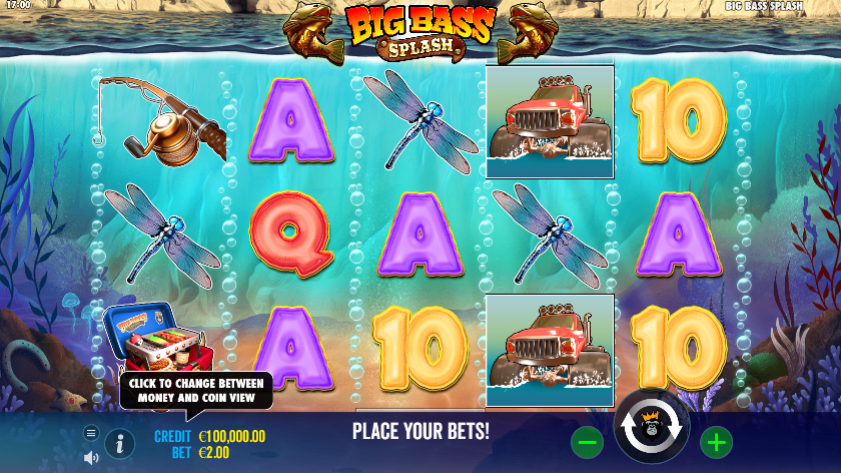 Fishing slots are all the rage in 2022, having dislodged MegaWays-powered and Egyptian-themed games atop the most-played rankings.

Showing their hand yet again is Malta-based provider Pragmatic Play, who have certainly made a splash with their latest contribution.

While Big Bass Splash's gameplay follows convention supported by typically on-point graphics, the provider has thrown a curveball by chucking - wait for it - monster trucks into the mix! Yes, monster trucks! We're as confused as you are.

Infusing the game with oversized vehicles is sure to capture players' imaginations, and appears to be a shrewd move from the game's creator. Moreso given the sea of homogenous offerings from competing studios showing very little in the way of differentiation.

This is far from new territory for our patner. Pragmatic Play have dipped their toes in the fishing pond more than once with Fishin' Reels, not forgetting the popular 'Big Bass' franchise which has been given several makeovers and which spawned this very release.

Big Bass Splash compliments the provider's roster of fishing-themed games through a highly enjoyable mash-up of elements - a must-play for fans of the genre.