Jet Off with These Sizzling Hot Slots

Beach parties, lazy days, cocktails in the sun.. what could be better?

We're making that dream a virtual reality by bringing you our compilation of five superb sun-drenched slots.

Enjoy our recommendations away on your jollies - and upon your return to overcome post-holiday blues! 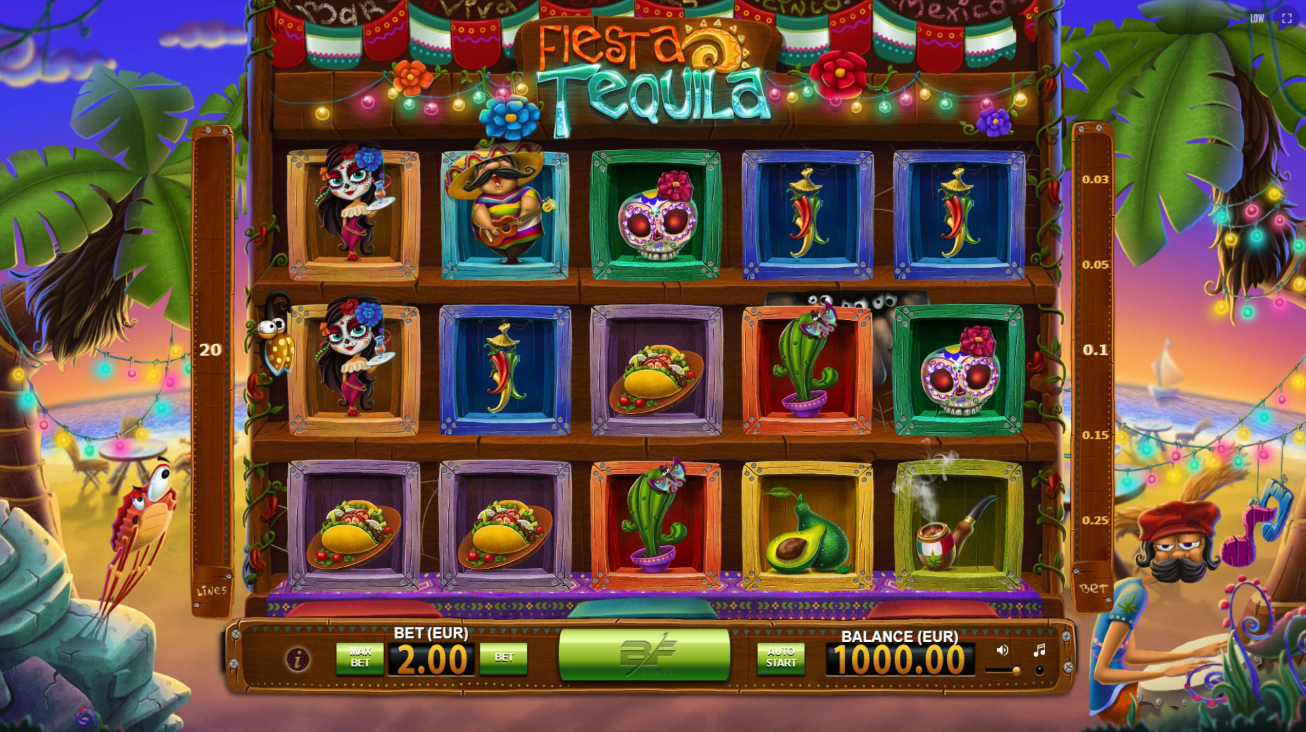 Who hasn't necked a cheeky shot of tequila down the local beachside taverna while on their hols?

The action unfolds on an idyllic tropical beach presumably somewhere in Mexico as night begins to draw in. Palm trees sway in the breeze, enveloped in jovial music to create an inviting atmosphere and setting the tone for some enjoyable spinning.

Played using a 5-reel, 20-payline configuration, Cascading Reels are triggered every time a win is accomplished in Tequila Fiesta. Watch as winning symbols disappear from view, allowing space for more to drop in to create additional win opportunities.

Mulitipliers are also at the heart at the action. Beginning at 1x, these increase after every successive cascade and can lead to some tasty wins in the base game.

Finally, landing three scatters represents your pathway to Free Spins, and like most games, this is where the most lucrative rewards are found.

For players whose idea of heaven involves watching the waves roll in at dusk, or those simply thirsty for some potent tequila far, far away, book a virtual trip to Mexico with BF Games today! 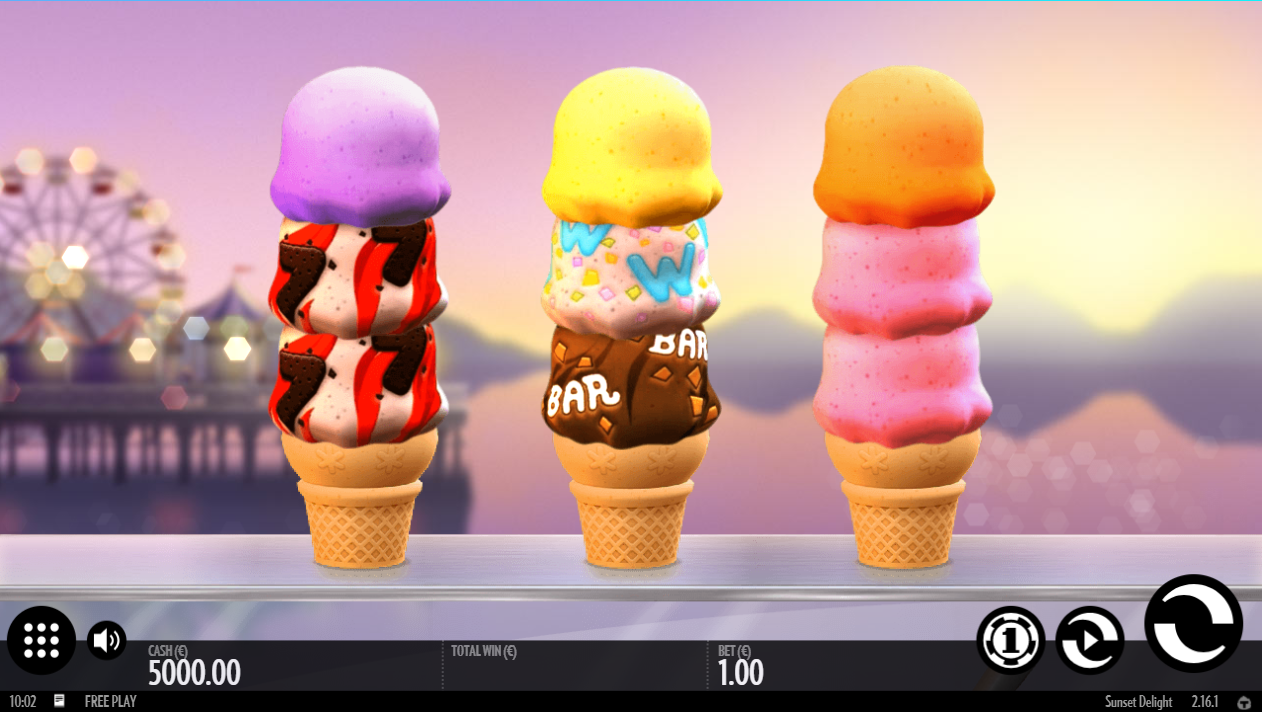 Traversing a few thousand killometres east, kick back and take a bite out of some sweet ice cream on your vacation in Thunderkick's delightfully unusual creation, Sunset Delight.

Anyone who's ever visited a quaint English seaside town in their youth will feel right at home with this light-hearted game. Sunset Delight's sea glistens gorgeously at dusk while a seaside fair sits idle to the left, creating a stunning, relaxing environment in which to enjoy some carefree slot action.

While players are likely to emerge from Tequila Fiesta nursing a severe hangover, the only thing you'll suffer from Sunset Delight is acute sugar rush, given the lashings of delectable ice cream on show.

The aim of the game is to line up matching symbols, represented by a variety of ice cream scoops, across adjacent reels. Each spin sees the trio towers of ice cream whisked off to the right as a new set fills up from the ice cream counter, providing a delight to the senses. The game's unconvential reel setup marks an intriguing break from convention, a not uncommon practice by Thunderkick who are one of the industry's more experimentalist studios.

As to features, you can avail of Free Spins in return for landing three scatters - served by the WAFER symbol, along with wild symbols in this basic but charming release.

Sunset Delight can be considered another uniquely stunning addition to Thunderkick's back catalogue. Try it at Wildz for a holiday slot with a difference.

Sam on the Beach (ELK Studios) 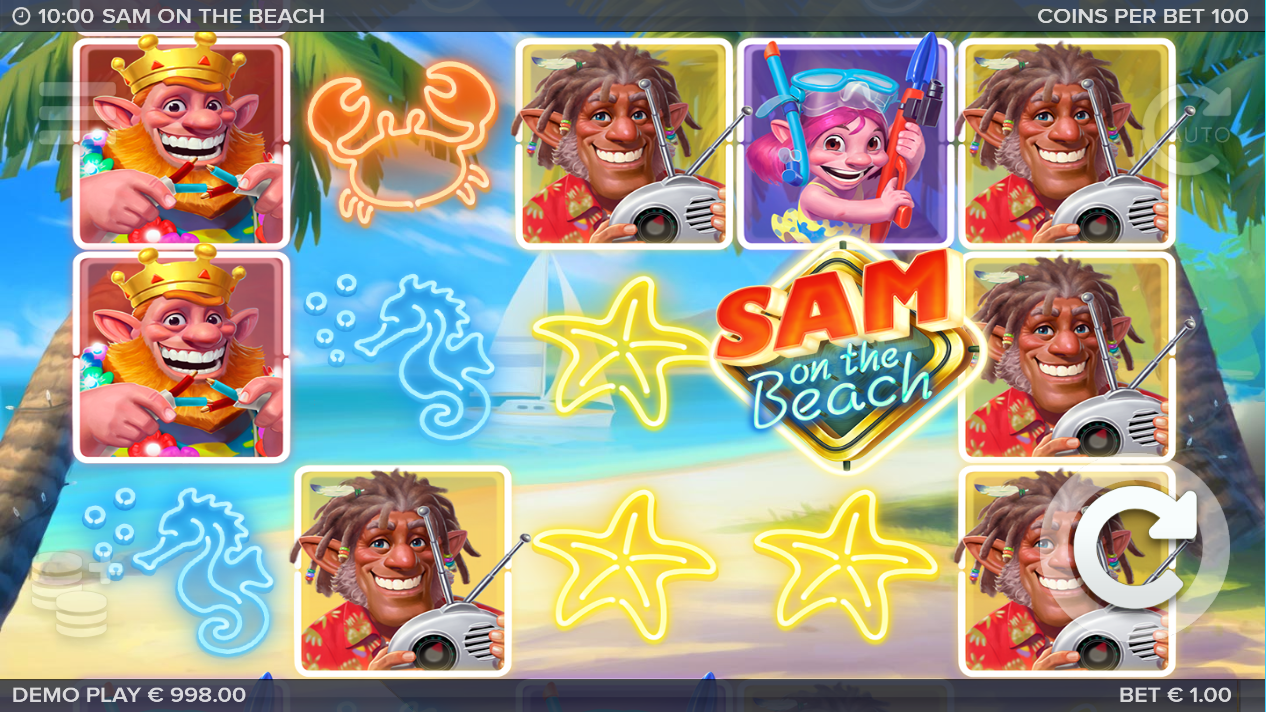 Time to hit the beach with ELK Studios and their quirky lead man, an eccentric troll named Sam.

Played across a 5-reel, 3-row reel layout, Sam on the Beach paints a picture of bliss. The game is as fun as it is vibrant, brimming with bright colours and packing a reel feel-good factor. This is a beach where life moves at a decidedly slower pace, accentuated by some gentle Caribbean music combined with relaxing sounds of the sea.

Sam's brought his family in tow to the beach, each member representing a playing symbol, while hiding a handful of tricks up their sleeve to help boost your returns.

Free Spins are in the offing, and with them the chance to benefit from a menu of "Electric Treats". Male family members may step in to serve up sticky wilds during the feature, while Sandra occasionally contributes by handing out multiplier values.

Complementing Free Spins is a special feature labelled Beach Memories Respins. You'll need to land a quartet of trolls on a payline to activate this bonus extra. Doing so sees four sticky wilds added to the reels before a respin ensues, capping what is a brilliantly bizarre game by ELK Studios. 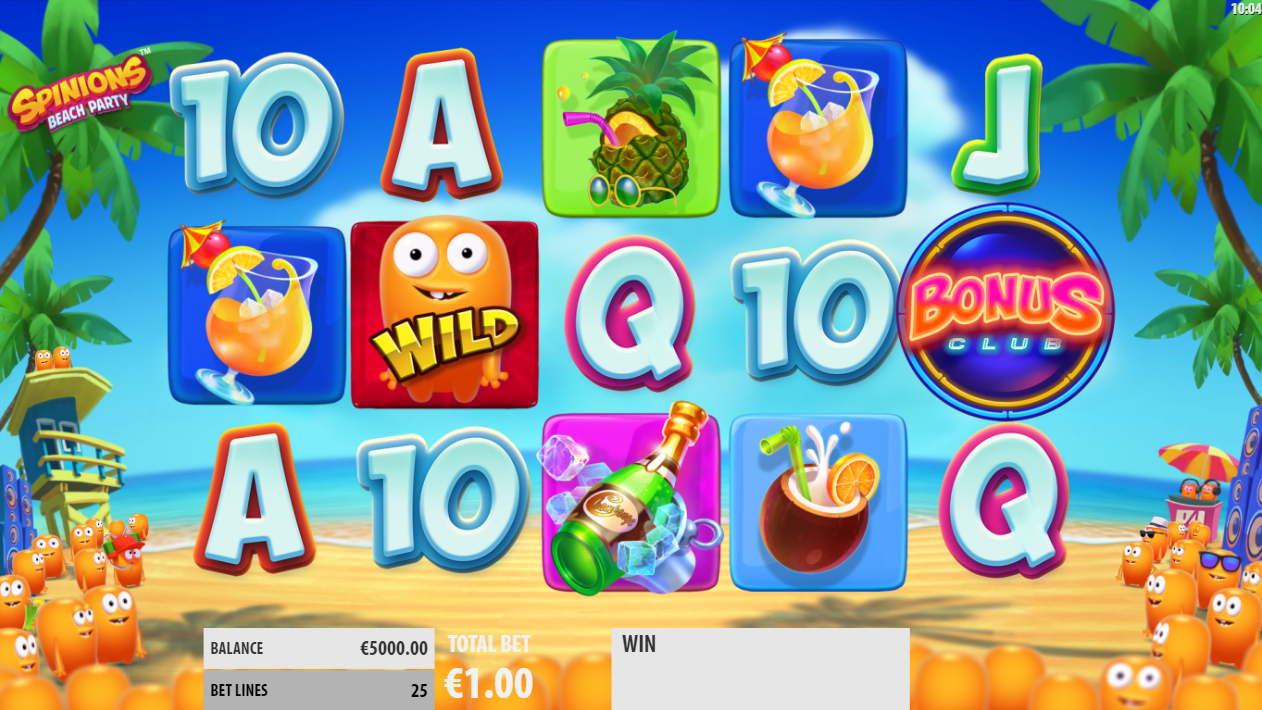 Next up, it's the turn of premier content creator Quickspin to assume beach party hosting duties.

Bursting with colour, the stars of the show in Quickspin's cartoonish summertime affair, Spinions, are a band of orange creatures bearing the same name.

Introducing the Spinions: a wide-eyed, fun-loving bunch who love nothing more than spending their days partying on the beach. The clan also come equipped with some nifty bonus features to enhance your enjoyment levels in this sun-kissed corner of the world.

Look out for a pair of wild symbols - represented by the Spinions themselves - showing up during a spin. This brings a Respin into play which sees the triggering wilds lock in place for the spin, translating into additional chances to win. What's more, the process carries on indefinitely provided wilds continue to show up with each spin, which can quickly snowball into mounting profits.

As is so often the case, Free Spins are the headline attraction in Spinions. Activated upon three scatters landing, wilds remain fixed in place for the duration of the feature whenever they appear, potentially spelling even more tidy payouts.

This is one beach party you don't want to miss. So jump on a plane and join the beach-dwelling Spinions for fun and frolicks this summer! 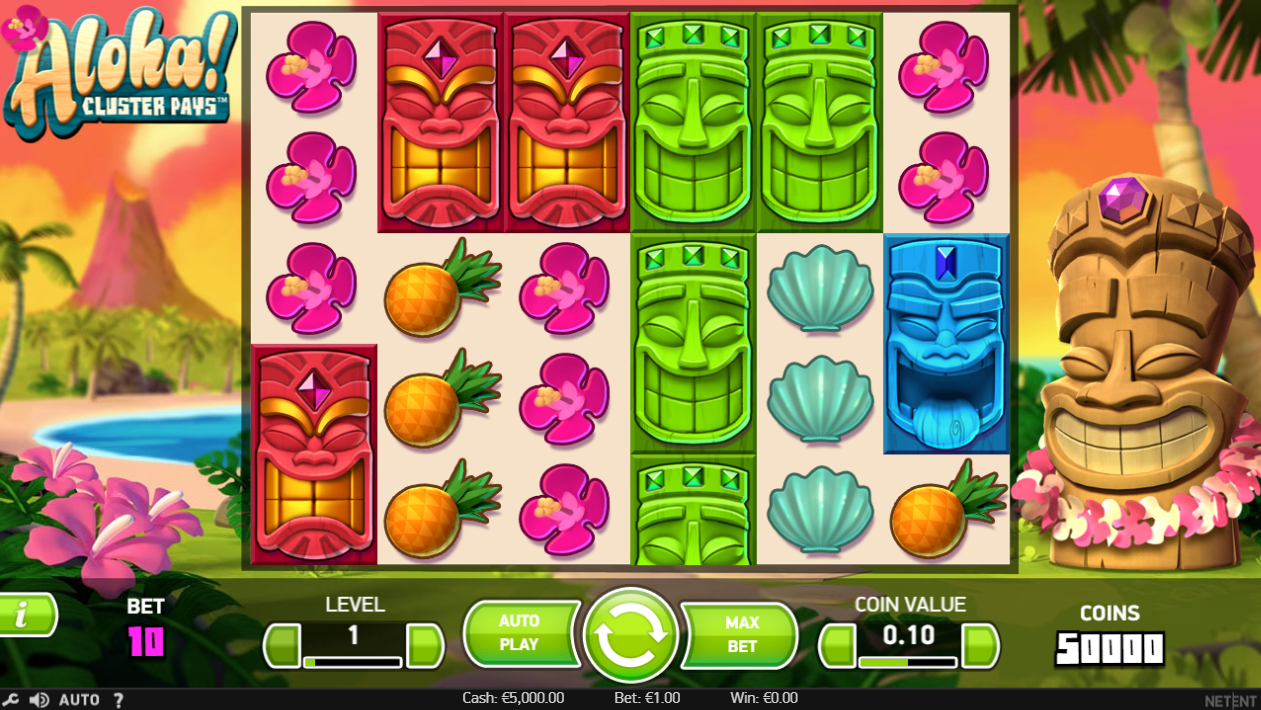 Sporting vibrant, eye-catching visuals and jaunty music, the game invites players to pack their passport for a Polynesian adventure they'll never forget. The location is Hawaii - an exotic, vacant beach, to be precise, where we find a grinning Tiki statue overseeing proceedings beside a 6x5 reel layout.

As you might have guessed, a Cluster Pays game engine powers the action in Aloha! Cluster Pays. This is a common format found in countless video slots, which functions by awarding wins whenever a minimum number of clusters - in this case 9 - form anywhere across the reels.

Keep your eye out for the volcano erupting after a cluster win is accomplished, adding to the experience.

At any moment following a win, it's possible for the Sticky Wins Respin feature to initiate. What this does is hold triggering symbols in place as every other symbol in view spins again. What's more, new symbols may latch onto any existing clusters, ramping up your win potential. The Respin feature terminates only when no fresh symbols contribute to the clusters in view, or if you manage to fill the screen entirely.

No NetEnt title is complete without the obligatory Free Spins, and Aloha! Cluster Pays does not disappoint. 9-12 Free Spins are awarded after 3-6 scatters land, complete with Symbol Drops that remove the lowest paying symbols from play.

NetEnt served up another winner with this slot, complenting their extensive game repertoire by pairing highly original gaming with a popular theme.